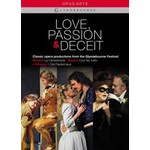 The Glyndebourne Festival is a quintessentially English summer event. The world's most acclaimed artists, conductors and directors excel in producing top-flight performances every year and this latest collection offers the choice of three such classic opera productions.

'…an evening of Mozartian magic… a staging that cries out to be revisited.' Sunday Times on Cosi

'I had to search long and hard down memory lane to recall a Così that so vividly revealed both the pleasure and the overwhelming pain of this evermore disturbing masterpiece, and I failed.' Opera on Cosi

"This is a truly marvellous performance on all counts - staging, conducting and singing. Sir Peter Hall… manages to breathe new life into the routines without ever slipping over into farce, while exploring each character in some depth. The sense of an ensemble on top form is underlined by Vladimir Jurowski's exacting, pellucid and vivid interpretation, so that the music, like the libretto, is presented afresh." (Gramophone on Cenerentola)

"Malena Ernman is a stunning Orlofsky (at the end, Lawless reveals that the prince was really a princess after all), and Håkan Hagegård and Pamela Armstrong are very satisfying as Dr. Falke and Rosalinde, respectively. Lyubov Petrova is a charmer, both visually and musically...The set is spectacular, particularly in Act Two, where the use of a rotating stage creates a movie-like effect." Classical Net, on Fledermaus