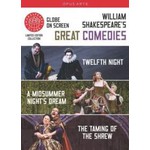 A Midsummer Night's Dream:
Shakespeare put some of his most dazzling dramatic poetry at the service of this teasing, glittering, hilarious and amazingly inventive play, whose seriousness is only fleetingly glimpsed beneath its dreamlike surface.

Michelle Terry won the 2011 Olivier Award for her portrayal of Sylvia in Tribes (Royal Court). Michelle returns to the Globe having previously played the Princess of France in Love's Labours Lost (2007).

Twelfth Night:
One of Shakespeare's best-loved comedies, Twelfth Night was 'blissfully reborn' (Telegraph) for the 2012/13 season at London's Globe Theatre, under the direction of Tim Carroll. The hilarious tale of misdirection and deception is performed here by an all-male cast, among whom we find Mark Rylance as Olivia and Roger Lloyd-Pack as Sir Anthony Aguecheek. The production also marks Stephen Fry's triumphant return to the stage as the pompous Malvolio, ridiculous in his yellow stockings.

One of the Globe's finest & most acclaimed productions.

The Taming of the Shrew:
The Taming of the Shrew tells the tale of the sharp-tongued Kate, who must marry before her younger sister, Bianca, is allowed to find a suitor. Undaunted by her waspish reputation, Petruccio attempts to woo the not-so-fair maiden, but is faced with a tirade of poisonous insults. Samantha Spiro stars as cantankerous Kate, capable of knocking a grown man down with her fist. With a stellar supporting cast, the production is a triumph, thanks to its 'riotous mixture of verbal dexterity and slapstick' (The Daily Telegraph).