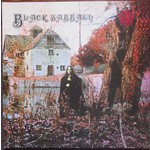 Reissue of Black Sabbath's self titled debut album, pressed on 180gram vinyl with original cover art and inner sleeve artwork, as well as a CD of the album.

Black Sabbath's debut album is the birth of heavy metal as we now know it. Compatriots like Blue Cheer, Led Zeppelin, and Deep Purple were already setting new standards for volume and heaviness in the realms of psychedelia, blues-rock, and prog rock. Yet of these metal pioneers, Sabbath are the only one whose sound today remains instantly recognizable as heavy metal, even after decades of evolution in the genre.

Circumstance certainly played some role in the birth of this musical revolution -- the sonic ugliness reflecting the bleak industrial nightmare of Birmingham; guitarist Tony Iommi's loss of two fingertips, which required him to play slower and to slacken the strings by tuning his guitar down, thus creating Sabbath's signature style. These qualities set the band apart, but they weren't wholly why this debut album transcends its clear roots in blues-rock and psychedelia to become something more. Sabbath's genius was finding the hidden malevolence in the blues, and then bludgeoning the listener over the head with it. - AllMusic