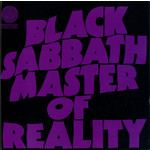 Reissue of Black Sabbath's album Masters of Reality, pressed on 180gram vinyl with original cover art and inner sleeve artwork, as well as a CD of the album.

The shortest album of Black Sabbath's glory years, Master of Reality is also their most sonically influential work. Here Tony Iommi began to experiment with tuning his guitar down three half-steps to C#, producing a sound that was darker, deeper, and sludgier than anything they'd yet committed to record. (This trick was still being copied 25 years later by every metal band looking to push the limits of heaviness, from trendy nu-metallers to Swedish deathsters.) Much more than that, Master of Reality essentially created multiple metal subgenres all by itself, laying the sonic foundations for doom, stoner and sludge metal, all in the space of just over half an hour. - AllMusic