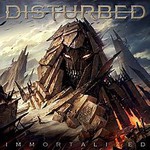 After a four year hiatus, Grammy Award-nominated, multiplatinum hard rock titans Disturbed return with their sixth studio album, entitled Immortalized.
The record features the unshakable first single The Vengeful One - "Musically, it's got that old school metal sound," says Donegan. "It's definitely Disturbed!" - along with an outside the box cover of Simon & Garfunkel's The Sound of Silence, unlike anything in the group's catalogue.

DELUXE EDITION BONUS TRACKS:
14. Tyrant
15. Legion Of Monsters
16. The Brave And The Bold