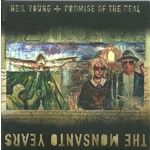 Neil Young + Promise Of The Real
The Monsanto Years (Vinyl)

Neil Young + Promise of the Real have joined forces and release this new studio album.

For this guitar-centric, full steam-ahead and highly-charged rock album, Young is joined by Promise of the Real, an LA-based rock band fronted by Lukas Nelson (vocals/guitar), along with Micah Nelson (guitar, vocals), Anthony Logerfo (drums), Corey McCormick (bass) and Tato Melgar (percussion). They have performed with their father, Willie Nelson and Young on previous occasions.

" Young's new album is a quick-and-dirty broadside against GMOs and corporations....These songs are powerfully felt, even if they probably won't end up getting within sniffing distance of Young's towering canon. At 69, his idealism is itself a natural wonder, and there's a warmth and beauty to his performances even when he's at his angriest. On the acoustic ballad "Wolf Moon," Young's voice creaks like a rusty hinge as he big-ups the land for withstanding "the thoughtless plundering." It's almost as if the Earth is an old buddy going through hard times, and he's taking it out for a beer. That kind of honesty has always been at the heart of his music. It's the warts-and-all passion that inspires us to hang with Young down any road he wanders." - Rolling Stone