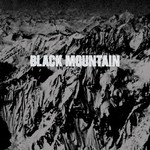 Black Mountain - Black Mountain - 10th Anniversary 2xCD Reissue - "It's only a cliché because it's true, but the greatest records are timeless. Black Mountain's self-titled debut album is just such a record, its roots leading twisting paths back into the past, while always sounding like 'now', like a future still to come. The work of a small collective of musicians operating from Vancouver, Canada, far from any industry buzz but firmly in the eye of their own storm of creativity, Black Mountain's debut grew from skeletal sessions cut by Stephen McBean and Joshua Wells. Here was a new classic rock, its reference points arcane and clear, its sound fresh, unfamiliar and irresistible. Savor the compact, spacey brilliance of that cosmic, heavy and subtle debut album, remastered and expanded now with a raft of delicious bonus tracks scavenged from the Black Mountain Army archives.

A1. Modern Music
A2. Don't Run Our Hearts Around
A3. Druganaut
A4. No Satisfaction
A5. Set Us Free