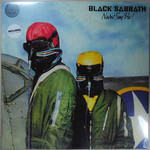 By the end of the '70s, though Black Sabbath remained a top concert draw, its albums had become increasingly erratic and sub-par when compared to its earlier master works. Singer Ozzy Osbourne's growing disillusionment with the band had reached a boiling point, especially after it took so long to complete 1978's NEVER SAY DIE, the original line-up's final album. Though the album's title might suggest that the band had reconciled its differences (Osbourne had already left the band once previously, only to return shortly afterwards), the turmoil spilled over onto the recording.

The album-opening title track remains the record's best-known track, as it was featured on Ozzy's popular 1982 solo live album of Sabbath material, SPEAK OF THE DEVIL. Other hard rockers on the first half of the album, such as "Junior's Eyes" and "A Hard Road" prove to be standouts. The final deciding factor for Ozzy's permanent split from the band occurred on the ensuing tour, when a hungry young band by the name of Van Halen opened the shows, continually blowing the headlining metal veterans off the stage.