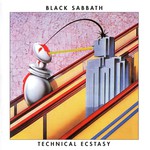 Technical Ecstasy' is the seventh studio album by Black Sabbath, produced by guitarist Tony Iommi and released in September 1976. The album was certified Gold on 19 June 1997 and peaked at number 51 on the Billboard 200 Album chart. After the frustrating legal battles that accompanied the recording of their 1975 album 'Sabotage', Black Sabbath chose Miami's Criteria Studios for the making of 'Technical Ecstasy', which continued the band's separation from its signature doom and darkness that had been a trademark of the sound of their earlier albums. The cover art was designed by Hipgnosis (Storm Thorgerson). Osbourne once described it as "two robots screwing on an escalator."

The album received mixed reviews upon its release, with Phil Alexander writing in 1998, "While today hardcore Sabs fans defend some of the bold steps taken on 'Technical Ecstasy', it was a confused offering which still hit Number 13 in the UK but limped into the US charts at 52." In 2013 Mojo magazine opined, "'Technical Ecstasy' is the sound of Sabbath trying to make a grown-up, radio-friendly rock record".

180gm vinyl includes a copy of the album on CD.