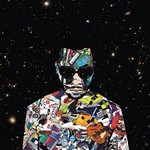 From time to time a DJ or producer comes along who transcends a particular scene, bridges the gap.between disparate movements and unites tribal music fans. Seven has that talismanic quality. His productions have a rawness… a loose-knit, lolloping groove that seduces even the most steadfastly stubborn of hips.

Released via the Ninja Tune imprint 'Universes' is his most honest and heartfelt musical statement to date. 'Universes' is a unique exploration of the producer and vocalist's musical landscape, traversing tempos and flipping styles with typical panache but always embedded in the bedrock of soul and funk.

When he's making straight ahead house music, the swing is reminiscent of classic Todd Edwards and the drums bump 'n' shuffle of Derrick Carter. And the vocals… well at times it's like he's channeling the spirit of George Clinton, offset with the sweet character of Peven Everett - the perfect balance of rough and smooth - it's that undeniable funk that hooks in the hip-hop fans, the cats that don't generally mess with "house" music. 'Good Vibes' (feat. Julio Bashmore) nails this dynamic in a whirlwind 3 mins 18 secs that recalls Daft Punk at their boisterous best - proof that sometimes all you need is a chopped-up disco loop and a hook.

Elsewhere on Universes Seven brings a similar soulful energy that Moodymann or Theo Parrish purvey. There are more introspective moments on the record too - such as 'Fighters' and 'Afterlife' (feat. Kutmah) - that explore murkier downtempo depths. Seven is a unifying force and the well of support for his endeavours runs deep, from Mos Def to Four Tet and way beyond. As an intergalactic soul record Universes delivers on all fronts, admirably showcasing the breadth and depth of SDJR's productions and the honesty and humour that makes his music so instantly recogniseable.