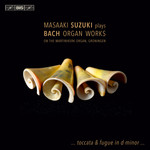 The recipient of the 2012 City of Leipzig Bach Medal, Masaaki Suzuki has earned an enviable reputation as an interpreter of the music of Johann Sebastian Bach - as a reviewer in International Record Guide has put it: 'With Suzuki you can hear Bach's heart beat'. To a wide audience he is known as the director of Bach Collegium Japan, and the moving force behind the ensemble's acclaimed recordings of Bach's complete sacred cantatas. Perhaps less well known is that he began his career - at the age of 12! - playing the organ at church services in Kobe, where he was born. Suzuki has remained true to the organ throughout his life, and for BIS he has previously recorded Bach's German Organ Mass, as well as programmes of Buxtehude and Sweelinck. He here appears on a disc which combines some of Bach's best-loved works for the instrument, including the D minor Toccata and Fugue, the Partitas on 'O Gott, du frommer Gott', BWV 767, the Canonic Variations, BWV 769, and the celebrated Prelude and Fugue in E minor, BWV 548. The recording was made in Groningen's Martinikerk, with Suzuki performing on the renowned organ, one of the most important and impressive in the Netherlands.

"If you like Bach - and even if you don't - this is a mandatory purchase. Musical and technical values are well up to the standards of the house and Albert Clement's lucid liner-notes are a bonus. Really, in these straitened times it's heartening to find a label that still holds to its core values; long may that continue. This is the kind of musicianship that changes minds; standard-setting sound, too.' (MusicWeb)

"Of all the current doyens of modern Bach performance, Masaaki Suzuki knows no limits to his explorations. This is a dazzling recital (from a musician better known as a director-harpsichordist) discerningly assembled and held aloft by three great pillars: the ubiquitous Toccata and Fugue in D minor, BWV565; the Pièce d'orgue, BWV572, with Bach whisking the French 17th century from under its own nose; and, to conclude, the great Prelude and Fugue in E minor, BWV548 (the Wedge). If one's reflexive default at the prospect of an organ recording - even an exquisitely curated Bach one - is one of dispassionate or nonchalant resistance, this recording is as likely to turn ears as any made." (Gramophone Award Nomination 2016 - Baroque instrumentall)