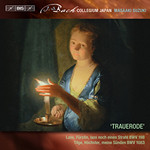 Although Bach's sacred cantatas span a huge expressive range and display a striking stylistic diversity, they were all composed for performance during a church service. In the case of the secular cantatas, on the other hand, their respective purpose is as varied as their subject matter and emotional content. They were usually commissions intended for occasions such as weddings, funerals and birthdays. As such they were sometimes performed in churches, and some of them have religious texts, but as the works gathered here exemplify, they were not related to the particular theme of the church service on a certain day. The cantata BWV 198, often called the Trauerode (funeral ode) was performed at an imposing ceremony in Leipzig's Paulinerkirche in 1727, held in order to mark the passing of Christiane Eberhardine, wife of Augustus the Strong, Elector of Saxony and King of Poland. The work adopts a suitably elevated style, but the text is resolutely secular, containing neither Bible quotations nor hymns. (A few years later, much of the music from the cantata did find its way into a thoroughly sacred context, however, as Bach reused it in his now lost St Mark Passion.) Compared to BWV 198, the circumstances surrounding Tilge, Höchster, meine Sünden, BWV 1083, are far more uncertain: why Bach at a late stage in his life (around 1746) decided to make an arrangement of Pergolesi's famous Stabat mater isn't known. In the case of the Pergolesi arrangement, the text is religious - a German paraphrase of the penitential Psalm 51 replaces the medieval sequence about Mary mourning Christ at the cross - but the work doesn't seem to have had any liturgical purpose.Bach's arrangement of this sequence of duets and arias for soprano and alto offers an intriguing opportunity to hear the 'new music' of the 1730's, filtered through the sensibility of the great master of a style which was already becoming a thing of the past.