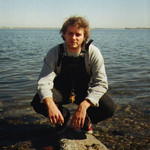 Mac DeMarco
Another One

The brand new mini-LP from Mac DeMarco, following on from 2014's Salad Days.

"If you like DeMarco, you'll like Another One. It's like a novella, or a made-for-TV movie-something to chew on while we wait for the next major project. It riffs on his established formula: the same rinky-dink guitar tone, funky basslines, air-tight percussion announcing a band with enough experience to avoid f*****g up the vibe. There are four slow songs and three songs that are a little less slow but still plenty relaxed, all of them filled with little details to catch your ear. The solo in "The Way You Love Her" was written with Robbie Robertson's strictured tone in mind, even as it ends up a few steps closer to the nu-reggae swing of Magic!'s "Rude". Few will sound as comely or as inviting as DeMarco does on "No Other Heart" when he sings, "Come on and give this lover boy a try/ I'll put the sparkle right back in your eyes/ What could you lose?"

The twinkling chord progression on "Without Me"-amongst his prettiest songs ever recorded-is buttressed by a cloud of washed out synthesizers, creating a lovesick feeling as he sings about accepting that a woman is better without him. "Just to Put Me Down" has a future as an extended set closer, with the refrain of the song title warping ever so slowly as he sings it over and over again, his guitar bursting into peals of expression. The wink of the album's title turns introspective on the title track, with a deeply languid DeMarco ruminating about the uncertainty of his relationship while wondering if "another one" is knocking at the door of his beloved." - Pitchfork