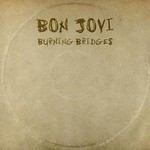 This is Bon Jovi's first album since 2013's What About Now.

Over an illustrious career spanning more than three decades since their formation in 1983, Bon Jovi has earned their place among global rock royalty. Selling more than 135 million albums worldwide to date, an extensive catalog of hit songs, and more than 2,900 concerts performed in over 50 countries for more than 37 million fans. Bon Jovi took home the Top Tour Award at the 2014 Billboard Awards, which acknowledges the top grossing tour and the Eventful Fans' Choice Award. Bon Jovi is the consummate rock and roll band!