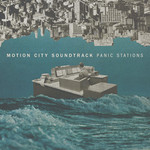 When Motion City Soundtrack formed in Minneapolis in 1997 there was a sense of fun that threaded through everything that involved the band. That youthful glee, the feeling that everything was exciting and anything was possible, has been inevitably dampened over the years. On their sixth album, PANIC STATIONS, MCS found that feeling again. The process of creating the new songs, which open a new chapter in the band's storied career, was based on instinct and openness, a methodology that resulted in a buoyant, impassioned record.