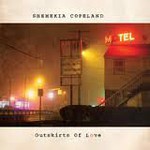 Shemekia Copeland-her powerful voice and magnetic stage presence have made her one of the most celebrated roots music artists of her time. Five previous Alligator releases and two Telarc titles have earned Shemekia two Grammy nominations, nine Blues Music Awards and over 200,000 career sales.

Outskirts Of Love marks her return to Alligator, where she's had her greatest sales success, and features guest artists Billy Gibbons (on a smoldering version of ZZ Top's "Jesus Just Left Chicago"), Robert Randolph, Will Kimbrough and Alvin Youngblood Hart.

This album celebrates Shemekia Copeland's continuing mastery of roots music styles from blues and soul to rock and Americana. Despite the accompanying star power on this record, Shemekia and her commanding vocals dominate the performances on new original material, plus songs by John Fogerty, Albert King, Jesse Winchester, Jessie Mae Hemphill and her father, Johnny Copeland.