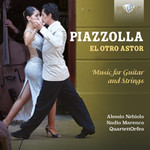 Most albums of music by the undisputed master of Argentine tango, Astor Piazzolla are still issued at full price but following the success of 'Café 1930' (94896) with guitarist Andrea Dieci and violinist Piercarlo Sacco, Brilliant Classics presents some of the composer's best-loved ensemble works. The Four Seasons of Buenos Aires is a chic 20th-century counterpart to Vivaldi's cycle of violin concertos, and has been paired as such in performance and on record by Gidon Kremer among others, as Piazzolla's music has always been susceptible to sympathetic arrangement; here the cycle of four character pieces is performed in a version (created by the guitarist Giorgio Mirto, who has made many albums for Brilliant Classics) nearer to its origins as a piece for Piazzolla to play on bandoneon with his tango quartet.

The five Tango Sensations are heard in an arrangement adapted from one made by Manuel Barrueco, where the solo bandoneon part has been reassigned to the guitar, rather than the more common arrangements for chamber orchestra which arose after Piazzolla's death in 1990; the recording sessions with the Kronos Quartet were the last he attended, and the music itself may reflect a 'late' character of melancholy which is shared by the concerto he wrote in 1985 for bandoneon and guitar. Here the parts for string orchestra are played one to a part by the members of QuartettOrfeo, an exciting young string quartet based in Rome. The album is rounded off by an arrangement made especially for this recording of the Ave maria which has become such a signature tune for Piazzolla, and featured on many film soundtracks.

The album overall is a fine demonstration of Yo-Yo Ma's remarks about Piazzolla: 'His music is endlessly passionate, full of yearning and at the same time tremendously contemporary. There's a quote to the effect that Piazzolla is the Ellington of Argentina, and in a way it's true. The music grew in him and he adeptly incorporated the influence of his surroundings whether from New York, Paris or Buenos Aires.'

This fascinating disc contains lesser known music by Astor Piazzolla, in arrangements for guitar, (accordion) and string quartet, a formation with which Piazzolla himself performed many of his works.
The music, vintage Piazzolla, breathes the pulse of Buenos Aires, the bohemian atmosphere, the yearning, the joy, the passion and the ever present Tango melancholy. Included are The Four Seasons of Buenos Aires, The Five Tango Sensations, the Concerto for Bandoneon, Guitar and Strings and the Ave Maria.
Performed by virtuoso guitarist Alessio Nebiolo (winner of numerous International guitar Competitions), the Quartett Orfeo, and Nadio Marenco, accordion.
Booklet contains excellent liner notes and artist biographies.