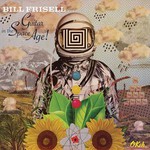 Guitar in the Space Age! finds guitarist Bill Frisell going back in time to the guitar music of the country, surf, blues, and early rock & roll of the late 1950s through the mid-'60s: the music that initially inspired him. His band -- Greg Leisz on guitar and pedal steel, drummer /vibraphonist Kenny Wollesen, and bassist Tony Scherr -- are all longtime associates. Though most of these songs are classics -- there are two originals -- Frisell reimagines them in a jazzman's context while remaining faithful to familiar presentations.
Guitar in the Space Age! is a joyous recording. Far from an exercise in mere nostalgia, it reveals new reasons as to why these tunes are eternal. Frisell and his collaborators understood exactly what they were going for, and it sounds like they had a hell of a great time getting there. - AllMusic