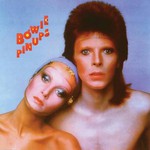 With everyone from the Band to Don McLean doing oldies albums, the Who revisiting the Mod era, and David Bowie's guitarist Mick Ronson's obvious brilliance in the genre (as evidenced by his one-man Yardbirdmania on "Jean Genie"), the idea of an album re-creating mid-Sixties English rock classics seemed perfect. And every song included has been a personal favorite for years.

To Bowie they have been more - they are representative of a phase of the London scene he was very much a part of as leader of Davy Jones & the King Bees. He had the roots, perspective and proper motivation to make this album a success. Unfortunately, something went wrong in the execution. Although many of the tracks are excellent, none stands up to the originals. That might be understandable when dealing with the Who (I doubt if they could equal their own "Anyway Anyhow Anywhere" today) or Pink Floyd.

But even in 1965, any of a thousand bands could have done "Everything's Al' Right" as well as the Mojos, and even the McCoys did a better version of "Sorrow" than the Merseys or Bowie. But comparison with the originals is unnecessary, since they will be unfamiliar to most who listen to the album. In that light, many of the cuts do rate somewhat higher. Ronson & Co. turn in good raving tracks for the Pretty Things' "Rosalyn," the Yardbirds' "I Wish You Would," and the Kinks' "Where Have All the Good Times Gone."

But all have been underproduced. The songs were originally conceived as trashy, instant pop fodder, and their simplicity demands a rough edge to give them the punch they need to be effective. That edge is missing, since the tracks are mixed down to make way for Bowie's voice. And therein lies Pinups' true failure. In the past, the vocals in this genre would scream for attention from the very center of the tracks' blast of pure noise. But Bowie's vocals float carelessly above the music, and his excessively mannered voice is a ridiculously weak mismatch for the material.

I have always thought Bowie more than merely avant garde, and credit him with the best of intentions. And while Pinups may be a failure, it is also a collection of great songs, most of which are given a more than adequate, and always loving, treatment. Maybe the fairest conclusion to draw is that Bowie can't sing any other way, did the best he could, and the result isn't all that bad.