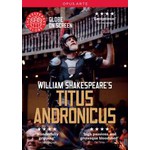 The smash hit of Shakespeare's early career, Titus Andronicus is one of the Bard's most experimental works, a revenge tale of the utmost brutality that centres around the honoured Roman general who fatally refuses to show mercy to the eldest son of Tamora, Queen of the Goths, whom he has defeated in war. Hailed as 'one of the darkest and most seminal productions in the Globe's history' (Daily Telegraph), director Lucy Bailey's staging of the Roman tragedy sees the great London theatre transformed into a temple of death, one in which swathes of black fabric coalesce with horrific violence and stand-out performances to create shatteringly powerful drama.

Filmed in 2014, this revival of Lucy Bailey's gory 2006 production of Shakespeare's revenge tragedy had audiences fainting in the aisles.

''You leave the theatre feeling both harrowed to the marrow and disconcertingly elated.'' The Daily Telegraph