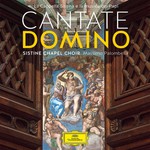 Introducing, by kind permission of the Vatican, the first studio album ever to be recorded in the Sistine Chapel. "Cantate Domino" opens the door to some of the world's most beautiful choral music, as well as into one of the most treasured sacred locations on earth.

Featuring the Chapel's resident choir - one of the longest-established choirs anywhere in the world. Based at the heart of the Vatican, this unique musical institution has a rich history through the centuries, stretching back to the Middle Ages. Featuring music written for Popes, and this - his choir - across the centuries. An album of musicological interest and importance, as well as one containing some of the most beautiful choral music ever written. Including world premiere recordings and previously unpublished works and editions by Palestrina, Allegri & de Victoria.

"Cantate Domino" follows the November 2014 release of "Habemus Papam" on Deutsche Grammophon - a double album featuring live recordings of the music sung by the Sistine Chapel Choir before, during and after the 2013 Papal Conclave that led to the election of Pope Francis. A unique opportunity to connect in the digital space and beyond with broad target groups - Catholic communities, specialist choral aficionados, and Classical Casuals seeking relaxation through contemplative and calming music

"If you want a realistic experience hearing a very fine choir singing in the Sistine Chapel, performing works that would have been sung there centuries ago, this recording will serve you well." (ClassicsToday)