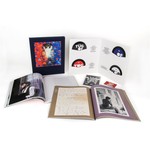 Tug of War, originally released in 1982, is the third solo album by Paul McCartney. The album was produced by George Martin and includes numerous guest musicians, including Stevie Wonder, Carl Perkins, and Ringo Starr. Tug of War reached #1 on both the US and UK charts and received a Grammy nomination for "Album of the Year" in 1983.

This deluxe Edition 3 CD/1 DVD plus a 112 page essay book and 64 page scrapbook.