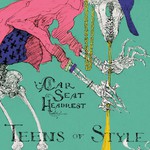 Car Seat Headrest is the project of Seattle artist Will Toledo. With a vision that is both sweeping in scope and intimately personal, Car Seat Headrest embodies the DIY ethos at its best. The songs are often long and complex, but they are anchored in irresistible melodies and a piercing emotional directness.

While many of his home-recording contemporaries prioritize aesthetics over meaning, Will's lyrics are central to his artistic mindset. His songwriting is sharp, literary, and culturally omnivorous as it touches upon youth and death, love and depression, drunken parties and 2nd century theologians. Ever surprising, his imagery ranges from playful to sexually frank to sorrowful, often within the same song.

On Teens of Style, Will has taken material from the first three years of the band's existence and reworked it to generate some of the most realized arrangements to date. Drawing material from 3 (2010), My Back Is Killing Me Baby (2011), and Monomania (2012), Teens of Style provides a concise overview of the band's many sonic and emotional facets, with the songs ranging from electronic psychedelia to punky anthems and melancholic acoustic numbers.