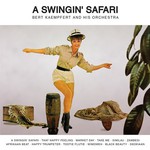 Bert Kaempfert And His Orchestra
A Swingin' Safari

In the first four years of his career, Bert Kaempfert released no fewer than twelve albums, including six alone in 1962! Of these A Swingin' Safari is perhaps the best known, named as it is after the instrumental song that would become one of Bert's most widely covered; Billy Vaughn's version actually performed better on the America charts, peaking at #13. The album (the tenth of Bert's career when originally released) offers an interesting selection of South African kwela styled music and would be largely responsible for establishing Bert as a worldwide phenomenon. The arrangements and orchestration throughout are top class, as you would expect from Bert Kaempfert, and among the usual ensemble of flutes, penny whistles and vocals the trumpet playing of Fred Moch is worthy of special mention.