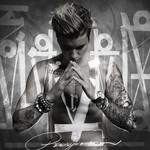 As global superstar Justin Bieber breaks chart records around the world with his #1 global hit 'What Do You Mean', it has now been announced that his upcoming new studio album PURPOSE will arrive November 13th.

As reported by Billboard earlier, "What Do You Mean" (released August 28th) has officially earned Justin his first #1 on Billboard's top 40 radio-based Pop Songs airplay chart, with over 135 million/radio listeners per week. The week of its release, "What Do You Mean" was crowned Justin's first #1 on Billboard's all-format airplay/sales/streaming-based Hot 100. It also went to #1 in Justin's native Canada, and became his first #1 UK national chart hit. "What Do You Mean," which hit #1 at iTunes within five minutes of its worldwide release last month, and went on to reach #1 at iTunes in more than 90 countries, sold over 335,000 units digitally in the U.S. in its first week out.

It was also revealed that the artwork for PURPOSE was created by Retna, the world renowned graffiti artist from Los Angeles, acclaimed for the distinctive constructed script he has developed. 26-year old Retna (aka Marquis Lewis), who has been exhibited around the world, has also done branding work for clients including Nike and Louis Vuitton.