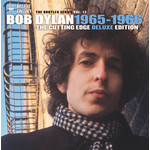 The latest chapter in Columbia/Legacy's highly acclaimed Bob Dylan Bootleg Series focuses on the legendary studio sessions that produced 'Bringing It All Home', 'Highway 61 Revisited' and 'Blonde On Blonde', the trilogy of album masterpieces which secured Dylan's reputation as a songwriter and performer of unprecedented depth, power and originality while significantly impacting the course of popular music and culture. All recordings included in 'The Cutting Edge 1965 - 1966: The Bootleg Series Vol. 12' are pristine transfers and mixed from the original studio tracking tapes.

Importantly, it provides a rare exploration into Dylan's creative process in the studio, allowing fans to experience another side of Bob Dylan through the evolution of his songs and recordings from this truly groundbreaking period.