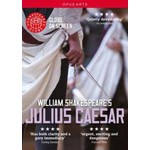 Julius Caesar is Shakespeare's tense drama of high politics, one which reveals the emotional currents that flow between men in power, with themes that still resonate even today. Staged in Elizabethan dress with Roman accessories and with music played on period instruments, Dominic Dromgoole's Globe production is 'fleet, urgent, exciting and dangerous' (Financial Times), combining 'freshness of acting' (Daily Telegraph) with an expert use of the theatre crowd and space that stylishly underscores Shakespeare's thrilling dissection of politics in action.