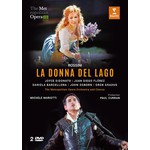 The Metropolitan Opera give this live performance of Rossini's work based on the poem by Sir Walter Scott. Michele Mariotti conducts the Metropolitan Opera Orchestra and Chorus with Joyce DiDonato as Elena, the lady of the lake, who loves the heroic Malcolm (Daniela Barcellona). However, King James V (Juan Diego Flórez) arrives in the Highlands and sets his sights on Elena while her father Douglas (Oren Gradus), who is rebelling against the King's rule, promises his daughter to clan chief Rodrigo (John Osborn).