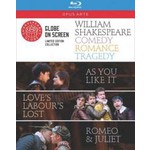 Shakespeare's Globe productions of As You Like It, Love's Labour's Lost and Romeo & Juliet are offered in this exclusive limited edition Blu-ray box set.

Thea Sharrock's irresistible new production of Shakespeare's popular romantic comedy As You Like It stirs wit, sentiment, intrigue and love into a charming confection which challenges the traditional rules of romance.

Dominic Dromgoole's production of Romeo & Juliet brings refreshing clarity to one of Shakespeare's most famous and best-loved tragedies. Ellie Kendrick, a truly youthful Juliet, and Adetomiwa Edun, a boyish Romeo, head an excellent cast whose period costumes point to the timelessness of parental disapproval, adolescent temperament, rivalry and violence.

"Naomi Frederick's superb Rosalind is a woman of wit and intelligence… Laskey's Orlando is equally bewitched, bothered and bewildered, and the playfulness between the two is a pleasure" (As You Like It) The Guardian

"Dromgoole is blessed with a smashing pair of young lovers. Adetomiwa Edun's Romeo is fresh, cheeky, light on his feet and full of the ebullience of young love...'' (Romeo & Juliet) Daily Telegraph

As You Like It
Love's Labour's Lost
Romeo & Juliet