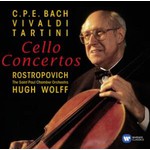 While J.S. Bach's Suites for solo cello are, by definition, closely identified with Mstislav Rostropovich as the supreme cellist of his time, the B flat concerto of Carl Philipp Emmanuel Bach represents a more unusual departure. It is programmed here with two concertos in D major by Italian composers of the elder Bach's generation, Antonio Vivaldi and Giuseppe Tartini.