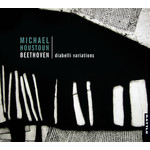 Following the monumental set of the complete Beethoven piano sonatas, Michael Houstoun and Rattle proudly release a superb account of the Diabelli Variations, thirty-three variations on a waltz by Anton Duabelli composed by Ludwig van Beethoven between 1819 and 1823.

Considered to be one the great sets of variations, the Diabelli Variations are widely heralded as among the finest works for solo piano ever written. In his book, "Beethoven: The Last Decade", Martin Cooper writes, "The variety of treatment is almost without parallel, so that the work represents a book of advanced studies in Beethoven's manner of expression and his use of the keyboard, as well as a monumental work in its own right".

There is no doubt that Michael is one of the great Beethoven interpreters of the our time, one of this country's finest musicians, and an artist of exceptional skill, perception, and acuity. Beautifully recorded by Rattle's in-house engineer Steve Garden and produced with considerable perception and detail by Kenneth Young, this recording has captured Michael at the peak of his artistic clarity, focus, and insight. The Diabelli Variations is not only one of Michael Houstoun's finest recorded performances, it is also one of the most joyful and affirming albums in the Rattle catalogue.

50 Best Children's Classics: Includes 'Peter and the Wolf', 'Carnival of the Animals' & 'Young person's guide to the orchestra'