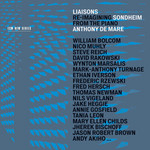 US concert pianist Anthony de Mare pays tribute to Stephen Sondheim in a fascinating project. De Mare invited composers from a broad variety of genres from Sondheims own world of musical theater to jazz, classical, pop, film and beyond to re-imagine a Sondheim song of their choice as a solo piano piece.Contributing re-composers included Steve Reich, Wynton Marsalis, Mark-Anthony Turnage, Fred Hersch, Ethan Iverson, William Bolcom, Duncan Sheik, Nico Muhly, Eve Beglarian, Gabriel Kahane, Thomas Newman, Jake Heggie, and more - in total, 36 composers, ranging in age from 30 75 and representing seven countries and 29 Grammy, Pulitzer, Tony, Academy and Emmy Awards!Each of the composers is having a conversation with Mr. Sondheim, Anthony de Mare told the New York Times, with his material but also his influence, his musical wit and his craft.

To hear composers take my work and take it seriously ... it s a thrill. --Stephen Sondheim

'Liaisons' is the wonderfully apt title given by pianist Anthony de Mare to his commissioning project, which brings together three dozen composers - a starry who's-who of the contemporary music world - and the glittering, refined music-theater score of Stephen Sondheim […] It's thrilling to hear just how much material there is in a Sondheim creation for another composer to seize on, whether a single melodic detail or a full-size harmonic conception, and to witness the directions those ideas can be taken […] The whole undertaking is a triumph. Joshua Kosman, San Francisco Chronicle

Looking for something just about completely different? Here it is. It's not totally completely different, because it's yet another set devoted to that old fave Stephen Sondheim. The completely different aspect is that for once it's not the man's lyrics getting the close scrutiny. It's his melodies. Concert pianist Anthony de Mare asked a goodly number of contemporary composers to 're-imagine' a Sondheim tune. David Finkle, Village Voice