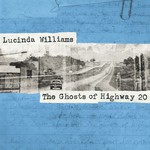 Three-time Grammy Award winner Lucinda Williams returns with The Ghosts of Highway 20. After 11 highly acclaimed studio albums, Williams is in the most prolific period of her nearly four-decade career, as she continues to challenge herself creatively. The Ghosts of Highway 20 finds Williams exploring new territory personally, sonically and vocally like never before.

Ghosts of Highway 20 is unlike any other Lucinda Williams album prior. There is a common thread running through the songs, uniting them under one collective theme as the haunting title track illustrates. 12 of the 14 songs were inspired by various periods and experiences throughout Williams' life that all tie into Highway 20 (aka Interstate 20), which runs in part from Georgia to Texas, the focal region of the album. Whether it is cities she has resided in (Atlanta, GA, Macon, GA), has family ties to (Shreveport, LA, Monroe, LA) or previously written about (Jackson, LA, Vicksburg, MS), Williams' personal experiences and connections to these areas inform the narratives. However, this is not an album about geographic locations, but songs and stories inspired by people, place and time.

The Ghosts of Highway 20 features some of the most expansive and experimental arrangements Williams has ever recorded, as heard on the epic "Dust", the chilling "If My Love Could Kill" and "House of Earth", a lost Woody Guthrie song Williams wrote the music to. Revered guitarists Bill Frisell and Greg Leisz provide incredible sonic textures and ethereal tones that enhance Williams' brilliant writing and wise and weathered vocals. Williams expands her own vocal timbre with sultry jazz-styled phrasing on "I Know All About It" and the extensive improvisational track "Faith & Grace". Williams puts her signature on a new interpretation of Bruce Springsteen's "Factory", and melts into the absolutely stunning "Louisiana Story" and "Place In My Heart".

At 62, Lucinda Williams' songs are as genuine and soulful as when she began writing. She defines the word artist by never compromising her music and staying true to her muse. On The Ghosts of Highway 20, Williams shows that her creative peak still lies ahead.

Side 1:
Dust
House Of Earth
I Know All About It
Place In My Heart

Side 3:
Ghosts Of Highway 20
Bitter Memory
Factory
Can't Close The Door On Love

Side 4:
If My Love Could Kill
If There's A Heaven
Faith And Grace