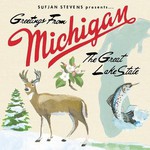 The songs on Michigan resonate with a range of sources-Vince Guaraldi, Terry Riley, and Nick Drake as accompanied by Stereolab and The Sea & Cake-in executing Stevens' peculiar palette that is simultaneously rock and blue-grass, jazz and pop, a style The Village Voice appraises as "Arthur Lee meets the Book of Psalms."

Michigan is the inaugural entry of THE 50 STATES, a cumulative recording project by Sufjan Stevens unparalleled in its panoramic enterprise: a record for each state! You think he's kidding, don't you?