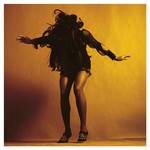 The Last Shadow Puppets return with their new album Everything You've Come To Expect out Friday 1st April 2016. The album finds Alex Turner and Miles Kane reunited with James Ford (production and drums) and Owen Pallett (string arrangements) and joined by Zachary Dawes (Mini Mansions) on bass, recording the follow up to 2008's The Age Of The Understatement at Shangri La Studio in Malibu.

Featuring current single 'Bad Habits', Everything You've Come To Expect is a more open and expansive work than its predecessor, wearing its influences less obviously on its sleeve - by turns the album is soaring, snarling and breathlessly seductive.

Aviation
Miracle Aligner
Dracula Teeth
Everything You've Come To Expect
The Element Of Surprise
Bad Habits
Sweet Dreams, TN
Used To Be My Girl
She Does The Woods
Pattern
The Dream Synopsis
The Bourne Identity