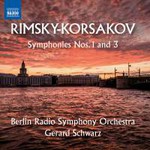 Begun when he was a seventeen-year-old naval cadet, Rimsky-Korsakov's Symphony No. 1 was hailed by the nationalist group 'The Five' as the first truly Russian symphony, in contrast with the German-influenced music of Anton Rubinstein. With its use of Russian folk-songs, this is a work of remarkable natural talent, justifying the early enthusiasm of Balakirev. Symphony No. 3, cast in a thoroughly Russian musical language, is notable not only for its significantly enhanced technical competence but for its great rhythmic vitality and subtle orchestration.

"Naxos provides a beefy Berlin sound, with weighty strings and imposing brass…the Scherzo has a fine swagger to it, building a good head of steam…the Third Symphony is alive with melodic ideas, opening in good-natured C major. Clarinet teases and flute and solo violin intertwine sinuously…and the symphony ends ebulliently…[this recording] should win new friend for these amiable works" Gramophone

"The Berlin Radio Symphony Orchestra enjoys all its folk song influences in this engaging recording of Rimsky's later revision of the [First Symphony]...[in the Third] he displayed his mastery of orchestral colour, brought vividly to life here in the Scherzo and in the closing Allegro con spirito, with Gerard Schwarz in total command." The Observer