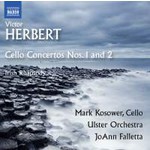 Irish-born Victor Herbert was one of the most celebrated names in American music in the late nineteenth and early twentieth centuries. A cellist, conductor, and composer of light operas, he was also a recording artist. His two Cello Concertos are full of graceful melodies, the First having a songlike slow movement and a spirited Polonaise finale that earned praise at its 1885 première in Stuttgart. The Second Concerto, scored for a large orchestra, is more tightly constructed than the First. It was hearing this work that inspired Herbert's boss at the National Conservatory in New York, Antonín Dvořák, to write his own great B minor Cello Concerto.

"Mark Kosower wisely doesn't overdo the sugar, nor does he overdo the gravitas, keeping rhythms springy and phrasing elegantly elastic…[his playing] has a sunny, carefree quality difficult to capture in a recording studio…the nimble, airy accompaniments curated by JoAnn Falletta are perfectly matched to Kosower's judiciously sentient interpretations, and both she and the excellent Ulster Orchestra have fun with [the Irish Rhapsody]" BBC Music Magazine, June 2016 ****

"Mark Kosower is a wonderfully eloquent soloist who is a joy to hear, especially in the feisty company of JoAnn Falletta…this newcomer is warmly welcomed" Gramophone Magazine, May 2016

The Plays & Poems of Noel Coward