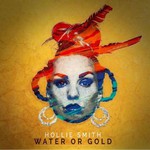 Undoubtedly one of Aotearoa's strongest voices, Hollie Smith emerged in the late 1990s, working with the likes of Fat Freddy's Drop and Trinity Roots, she then cemented her place as one of the country's most cherished acts with the 2006 Don McGlashan penned single 'Bathe In The River'. Hollie's following albums have entered the NZ charts at number one, with her debut LONG PLAYER selling double platinum and winning Hollie 'Best Producer', 'Best Female Solo Artist' and 'Breakthrough Artist of the Year' at the 2007 VNZMAs.

The album sits squarely in jazz and soul realms, and yet it's also one of her most daring as she moves into new territory - rollicking rock and blues. The songs were written over the past two years and span times of both joy and sadness. A lot of that joy, she explains, comes from her helping to raise the son of a now ex-partner. "It's definitely made me more of a positive person, and a lot happier. You know, learning how to sacrifice and not holding on to things, looking at the simpler things in life."

Also included on the album is Hollie's heart-breaking tribute to her good friend and media personality, Helena McAlpine, who died in 2015 after a long battle with breast cancer. 'Helena' captures the strength of Hollie's vocals, as well as the strength of a long-standing friendship.

Water or Gold was produced by Hollie and mixed in New York with Kiwi producer and engineer Aaron Nevezie.