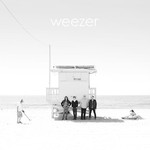 Weezer, also known as The White Album, is the tenth studio album by the American rock band Weezer. Hailing from Los Angeles, CA, Weezer has sold over nine million albums in the U.S. and over 17 million records worldwide. The alt-rock band has proven themselves a force in the industry with a 20-year catalog.