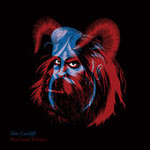 Tom describes himself as a story-singer of moonlit folk songs. A little bit raucous Irish ballads, a little bit grim outlaw country, a little bit swinging protest songs. Music for midnight drunks and, the brokenhearted. Used to dragging his guitar through back alleys and bars, he found himself at Auckland's Wine Cellar singing songs and drinking whiskey with some damn fine musicians and incredible humans. It was after one of these shows that plans were hatched to travel to Lyttelton to record Tom's songs with Ben Edwards.

One morning last June a ragged bunch of St Kevin's regulars: Tom, Dave Khan, Will Wood, Tom Landon-Lane and Steve Huf piled into a plane and headed off for the freezing cold cliffs of Lyttelton Harbour. Ten days later they had twelve songs. Ten months later we have an album, it's called "Howl and Whisper".

"My grandfather played fiddle in a pub band in Westport, Ireland when he was young. He passed his love for music onto my mum, who in turn forced it upon me. I learned piano and violin from a young age, toiling away with little enthusiasm and even less success. It wasn't until I got a guitar on my 19th birthday and started obsessing over Dylan, Van Morrison, Leonard Cohen and Paul Simon that music took hold of me. Now it has me locked in it's basement, chained to the blues, eating only folk and country music."

Old Moon
There's Your Lord
Came My Way
Just Kids
They Dug It All Away
Howl And Whisper
Dirty Road,
Time To Cry
My Woman, My Whiskey And Me
Looking For New York
A Park In Barcelona
The One You Want