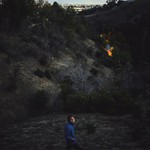 Written with the elegance of simplicity, and made into something great -- Singing Saw is American singer songwriter Kevin Morby's first release on the Dead Oceans label, and third overall.

The album's story began with Morby's move to the small, hilly neighbourhood of Mount Washington in Los Angeles, during the autumn of 2014. The previous tenants of the home left an upright piano behind, along with a few mysterious pieces of sheet music and a beginner's book of common chords. He sat down and began composing the songs that would form Singing Saw.

The musical arranging of Singing Saw takes it roots from Morby's time performing in The Complete Last Waltz, a live recreation of the bands legendary final performance.

Together with The Complete Last Waltz's producer and bandleader, Sam Cohen, they converted an A-frame house in Woodstock, New York and set about creating this record - a must-listen for those with a strong affliction for guitar and piano-led folk rock with a dash of old-time, Californian fuzz for good measure.