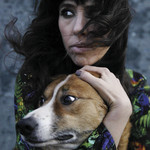 9Bach made their name by taking traditional Welsh folk songs and recasting them onto a spectral and haunting sound canvas. Their 2014 album Tincian was the worthy winner of the coveted Best Album in the BBC Radio 2 Folk Awards 2015. New album Anian, whilst influenced by the Welsh traditions,
comes from an altogether more anarchic place - calling for change, questioning the world and the role we play, how we treat animals and disregard nature. Darker in themes, but not without a sense of hope. Ethereal female Welsh language vocals shimmer alongside harp, swamp guitar, dub beats and a pounding rhythm section.