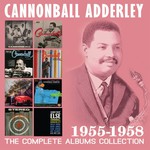 One of the defining players of the 1950s and 1960s hard bop era, Julian Edwin Cannonball Adderley remains one of the most respected and fondly-remembered saxophonists in all of jazz. With a sound that was uniquely his own and a repertoire that saw him support - and in turn be supported by - some of the greatest musicians and groups to emerge during the period, Adderley is the stuff of legend. A huge fan of the playing of Charlie Parker and a fierce defender of the entire genre, Adderley s talents rank highly alongside the likes of Miles Davis and John Coltrane, and his catalogue of work as a bandleader is still today among the finest of any jazz master. This collection contains the first eight albums released by Cannonball Adderley as bandleader. Spread over four discs and including both his initial recordings and some of his most highly-acclaimed works, the set forms the perfect introduction to the alto saxophonist and a superb reminder of the man s earliest works. Containing close to five hours of music in total, this compilation is the finest selection of Adderley's work from this period yet released.