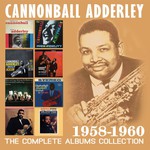 THE COMPLETE ALBUMS COLLECTION 1958-1960 Of all the hard bop players that exploded onto the American jazz scene during the 1950s, saxophonist Julian Edwin Cannonball Adderley was among the most highly-respected. Often named the spiritual successor to Charlie Parker, Adderley s lightning-fast delivery and clear, upbeat sound appeared on some of the most important recordings of the era, both as a sideman and as leader of his own bands. This four disc collection contains eight albums from the period 1958 to 1960, which together document the complete works of Cannonball Adderley during this crucial time in his career. With well over four hours of sublime music, and featuring the talents not only of the alto saxophonist himself but also that of his many famed collaborators and band members, this set provides a superb compilation of the man s work across the late 1950s and the beginning of the 1960s.