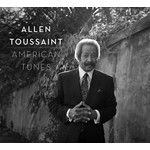 Toussaint had just completed the album when he passed away in November of last year during a European tour. Recording took place at two sets of sessions with producer Joe Henry: solo piano at Toussaint's New Orleans home studio in 2013, and with the rhythm section of Jay Bellerose and David Piltch-joined by guests Bill Frisell, Charles Lloyd, Greg Leisz, Rhiannon Giddens, and Van Dyke Parks-in Los Angeles in October 2015. The album comprises solo performances of Professor Longhair tunes and band arrangements of songs by Toussaint, Duke Ellington, Fats Waller, Paul Simon, and others.

Toussaint's children, Alison Toussaint-LeBeaux and Clarence Reginald Toussaint, who have long served as their father's managers, said of theAmerican Tunes album, "Our father approached this project with great care and understanding of the songs selected and paid true homage to Professor Longhair, his musical hero. He wanted to bring as much of the Toussaint touch as he could to these wonderful classics."