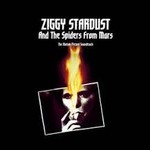 The accompanying soundtrack LP to the motion picture of the same name. Originally recorded in 1973 for D.A. Pennebaker's documentary and concert film, the soundtrack wasn't released until 1983 to coincide with the widespread theatrical release. It had originally been intended as a short promotional film for a new video format that RCA was developing but Pennebaker was so impressed by Bowie's live performances that he saw potential for a full scale concert film.

Although he had been commissioned to film the Monterey Pop Festival and Bob Dylan's 1965 UK concert tour, Pennebaker wasn't experienced enough in film distribution to convince the record label that Ziggy Stardust and The Spiders From Mars was commercially viable, thus the film lay unused for almost a decade. Upon release the film was met with mixed reviews and Bowie himself had developed so many personas that the 'Ziggy Stardust' phase seemed like a lifetime ago. Bowie was dismissive of the release but as an artist who, more than most, looked toward the future rather than the past, dismissing previously recorded works was a constant theme throughout his career.

It does capture, however, a crucial period in David Bowie's trajectory toward becoming a true global superstar and for that fact alone was well worth documenting.

Part 1 Side 1:
1 Introduction
2 Hang On To Yourself
3 Ziggy Stardust
4 Watch That Man
5 Wild Eyed Boy From Freecloud
6 All The Young Dudes
7 Oh! You Pretty Things