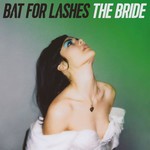 THE BRIDE follows the story of a woman whose fiancé has been killed in a crash on the way to the church for their wedding. The Bride flees the scene to take the honeymoon trip alone, resulting in a dark meditation on love, loss, grief, and celebration. Written as the soundtrack for a feature length film in mind, THE BRIDE is Khan's most ambitious work to date, sonically and visually incorporating an entire world inhabited by The Bride, along with the characters and places she encounters on the way.

THE BRIDE was conceived of and produced by Natasha Khan alongside a host of long-time collaborators and friends including Simone Felice, Dan Carey, Head and Ben Christophers.