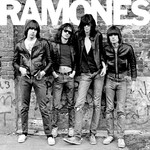 This year marks the 40th anniversary of RAMONES, recently named the "Greatest Punk Album Of All Time" by Rolling Stone, and certainly one of the most important and influential albums of all time.
This 29-minute masterpiece helped launch the punk rock scenes in both America and Britain, and also went on to inspire countless other artists for generations to come.

To celebrate the Ramones' lasting impact, Rhino has created the ultimate tribute to the band's landmark debut, which comes packaged in a 12 x 12 hardcover book. The 3CD/1LP set is a limited edition of 19,760 individually numbered copies and includes a sonically superior remastered stereo version and a meticulously recreated mono mix of the original album, plus rarities, unheard demos, and an unreleased live show, all produced, mixed, and mastered by the album's original producer and mixer Craig Leon.