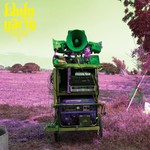 The journey began with a Youtube video and a headline that read 'MINDBLOWING PSYCHEDELIA FROM THAILAND' that crossed the continents and spread through the internet with great hype via Dangerous Minds (blog).

Hailing from a remote village just outside the city of Lom Sak in the valley of mountains on the border between North and Northeast Thailand, Khun Narin's Electric Phin Band have since released a self-titled debut in 2014, with Los Angeles-based producer Josh Marcy, who originally made the trip from the United States to record their captivating sound.

The music they play is called 'phin prayuk' - the first word referring to a 3-stringed lute known as 'the phin', which forms the basis of their sound - overlaid with numberous Boss effects pedals, to achieve the infamous sound.

II is a fresh return, introducing some new phin players, as well as members of the original troop, capturing the band's unique and hypnotizing psychedelia sound.