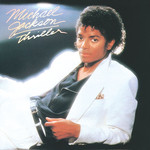 THRILLER is Michael Jackson's second studio album released through Epic Records. It was released on November 30, 1982, as the follow-up to Jackson's critically and commercially successful 1979 album OFF THE WALL. THRILLER explores similar genres to those OFF THE WALL, including pop, post-disco, rock and funk.

Of the album's nine tracks, four were written by Jackson. Seven singles were released from the album, all of which reached the top 10 on the Billboard Hots 100.

In just over a year, THRILLER became - and currently remains - the best-selling album of all time - it is now certified 30 times platinum in the US.